Hip replacement surgery entered mainstream orthopaedic practice in the 1960’s and has proved to be one of the most effective operations in medical history. The surgery involves replacing a damaged hip with an artificial joint, also known as a prosthesis. This now common operation is carried out to help people who are experiencing persistent pain and having problems with everyday activities because of restricted mobility.

Because the underlying conditions are often age-related, hip replacements are most frequently performed in people aged 60+, but hip surgery is performed in younger patients too. Most people experience a radical reduction in pain after the operation, as well as improved mobility.

The main causes of hip joint damage are:

The aim of hip replacement surgery is to relieve pain and restore the hip’s function, resulting in improved mobility and overall quality of life – freeing you up to do the things you enjoy doing.

It is an enduring truth that the best results of hip replacement surgery are achieved by well-trained and experienced surgeons using prostheses with a proven track record. Nevertheless, there have been significant advances in hip replacement design and the development of this operation continues. I embrace new technology, provided that the risk of unforeseen harm to the recipient is minimised. There are now several different types of hip replacement available and I believe it’s important to discuss these options with anyone who’s contemplating having the operation. 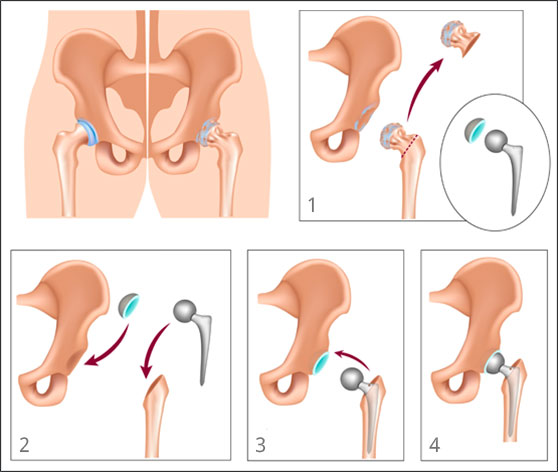 The hip joint is known as a ‘ball and socket’ joint, and is one of the largest in the body. As well as supporting your upper body when standing, walking or running, the hips play an important role in movement, allowing you to bend your legs up to the body, stretch them out to the side, and rotate them – for instance, when you change direction.

Hip surgery – what to expect

The process of having hip surgery starts with your GP referring you for a specialist opinion. When we meet I will talk to you about your symptoms and your health in general, I will examine you and review any X-rays that have been performed. We will then talk through the treatment options available and this will include the pros and cons of any surgery, if that is appropriate.

A week or so before the operation you will be invited to the hospital for a pre-admission assessment. This will include a check of your general health and medical history, some blood tests and possibly an X-ray – and you’ll be given lots of information about the hip replacement itself.

When you arrive at the hospital on the day of the operation, prior to your surgery, you will be seen by nursing staff, physiotherapists, the anesthetist and me. The operation typically takes around 60 to 90 minutes and the surgery that I perform is usually carried out under spinal anaesthetic with sedation. The spinal anaesthetic removes the pain sensation so that the sedation can be lighter than a full general anaesthetic, more closely resembling a sleep from which it is easy to wake.

After an incision has been made into the hip, the damaged joint is taken out and then replaced with the artificial joint. These may be made using a number of materials that include metal alloys, polyethylene and ceramics. I use the Exeter hip replacement, which has proved to be one of the best-performing hip replacements and which has been used for well over a million hip operations worldwide.

As with any surgery, there are risks, which vary from person to person and depend in part on your general health. The risk of serious complications is small but I will discuss them with you in detail before you have the operation.

After your surgery you’ll be encouraged to get up as soon as possible. While you’re in hospital, a physiotherapist will show you a series of exercises that will build flexibility and stability in your new hip. The physiotherapist will also explain what you should and shouldn’t do in the weeks following surgery. After the operation most people feel more secure using crutches at first, but these can be discarded as your confidence grows and as soon as you feel ready.

Most people stay in hospital just two or three nights before they’re ready to go home. Before you leave you’ll practice activities such as dressing and climbing stairs and you’ll be walking independently, though you’ll need someone to be around for you at home for the first week or two. While you should be able to drive after six weeks and resume all normal activities within two to three months, it can take up a year to experience the full benefits of your new hip.

The Exeter hip was originally developed in 1969 by Professor Robin Ling OBE, an orthopaedic surgeon at The Princess Elizabeth Orthopaedic Hospital and Dr. Clive Lee, an engineer at Exeter University.

The shape and design of the hip replacement were radically different to those around at the time, but over a period of more than four decades the results of this design have proven to be outstanding in research projects and joint registries all over the world.

Professor Ling and Dr. Lee didn’t just invent a new hip replacement. They also undertook research into surgical techniques and worked on understanding the properties of orthopaedic bone cement (a material called polymethylmethacrylate), which is used to fix the hip replacement into the body. Their pioneering work has been taken up by successive surgeons in the Exeter Hip Unit. Our research aids greater understanding about hip replacements and has led to the continued development and improvement of the prostheses and our surgical techniques.

In the last few years there have been lots of scare stories in the press about ‘toxic’ hip replacements and poorly performing designs. If you have an Exeter hip replacement you can be reassured that you will receive a prosthesis that has developed through evolution, not revolution. It is a tried and tested design that has been updated progressively and it can be relied upon to deliver excellent long-term results.