When choosing any service, and particularly with something as vitally important as surgery, the views of the people who have actually experienced that service are what counts. Here is a small selection of recent testimonials I have received from my patients.

Jonathan Howell has ‘given me back my life’. Being only 59 I was very distressed at the pain (both during what would be considered normal activities such as walking, digging, and at night in bed). My hip pain went immediately after the operation and within six weeks the wound pain had gone completely. I found Mr Howell very open to explaining the procedure and the potential benefits of surgery. I recommend him without qualification.
Peter Booth, April 2015

Mr. Howell replaced my hip just over six weeks ago and I was delighted to find that my quality of life was transformed almost immediately.  Within only three days I was walking without pain and without crutches and could sleep again.  I had expected to spend the first few weeks reading and watching films while I slowly recovered but in reality I very quickly felt so well that I wanted to be out and about and getting on with life.

Being mobile and free of pain is very energising and it is fantastic to be able to enjoy walking, gardening, exercise classes and all the activities I had been finding so difficult for so long.

I appreciated Mr. Howell’s positive and encouraging approach to the procedure and to the recovery period and am profoundly grateful to have my life back.
Hazel Vallance, July 2015

Within two days [after going home] I didn’t need my crutches, after three weeks I was moving around freely and by six weeks I could do just about everything. But the greatest benefit was the complete absence of any pain from the joint. The other factor was how quickly everything went back to feeling normal, to the extent that by seven or eight weeks post-op I had forgotten I had had the procedure.

I went through a second hip replacement with Jonathan in February 2015 and as I write some eight weeks later, I can say I am out of any pain, fully mobile, able to walk any distance and able to put on my own socks.

In my experience, my two hip operations have offered the biggest benefit return on surgery in the shortest time and if you are lucky enough to be operated on by someone as capable, articulate and experienced as Jonathan, then there is absolutely no reason to put up with arthritic pain in the hip joint.
Alastair Peebles, April 2015

Mr Howell was so very kind and someone I could trust and finally understood what I was feeling. After my recovery period the relief I felt was life-changing. Overall the trust, care professionalism and advice I have received from Mr. Howell is absolutely 100% perfect.
Karen Fellows, April 2015

“Hip Op” is the new dance craze! Well, I feel like dancing after my hip operation performed by Jonathan Howell at the Nuffield in Exeter. Although I am only in my 60’s the operation was not straightforward as I have osteoporosis and my joint was beginning to crumble. It needed to be a total hip replacement. From the very first time I met Jonathan I knew that I had made the right choice of surgeon as he put me at my ease immediately. He explained everything to me and gave me the reassurance that I was looking for. He agreed to carry out the operation sooner rather than later and within eight days I was “under the knife”. And what a clean cut! Hardly any long-term scar and no side effect. The Nuffield staff were great and two days later I was back in my own home. The crutches are now a thing of the past and I have no pain at all. I was in Australia when my condition became serious and I could hardly walk let alone dance to “Hip Op”. An early return to UK was essential and I am so pleased that I did. Thank you from a very happy Shirley Hodge.
Shirley Hodge, March 2015

It is exactly 6 weeks today since Mr. Howell replaced my hip joint. I have been delighted with the result, which has far outstripped my expectations.  Crutches have been handed back; I am walking fair distances – no more limping – and am back on my bike. But best of all I am sleeping again after 5 years of fitful rest. Improving my fitness and losing a bit of weight before the operation definitely paid dividends.

Mr Howell and his team have been calm, friendly and efficient, and inspired confidence from beginning to end. The speed of recovery has been astonishing and life changing. Now I can keep up with my grandchildren!
Frances Perkin, March 2015

As a businessman who travels internationally on a regular basis, I was pleased that Jonathan and I were able to find a date for the operation that fitted in with my busy schedule. I was particularly pleased to be back on the golf course within three months of the operation!
Chris Monk, March 2015

Just over a year ago, in January 2013, Jonathan Howell operated on me, fitting a complete hip replacement. It had been a long time coming and by the time he operated my mobility was severely limited and I was in a large amount of pain.

Well, one year down the line and it all now seems just a distant memory. The operation has, without exaggerating, changed my life. My hip now has full movement, feels totally natural and there is no pain whatsoever. People comment that I am like a new person and that my whole demeanor has changed as well as the more obvious improvements in mobility.

Best of all is that I had to give up motorcycling but now, back on a bike again, I shall be celebrating the fact by competing in an off road rally this summer in the Pyrenees. It will be very challenging and a couple of years ago I would never have thought I’d be able to take part in something like that again. It’s not important in the great scheme of things but to me it’s a very big deal.
Andres Sotos-Castello, February 2014 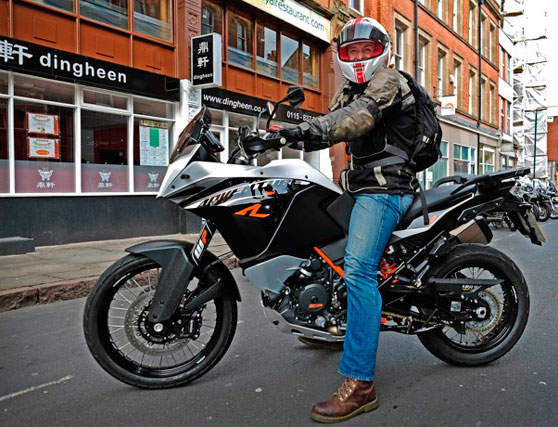 At my initial consultation with Mr. Howell I found his professionalism and his full and honest explanation of the process exceptional. The entire process from registration at the hospital to meeting Mr. Howell and his team just before theatre was again very reassuring. The aftercare was superb and I was able to leave after three nights. It has been six weeks since the operation and I am now able to resume a normal life without that debilitating pain. Now I can be far more involved with the grandchildren and also spending time getting my handicap down!
Peter Davies, April 2015